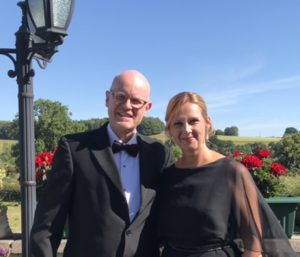 Danny and Henrietta Breen have been at Rose and Crown House since January 2005. After running the business for many years as a popular destination food pub, in 2021 they closed the restaurant doors but continue to share their home with bed and breakfast guests.

Danny Breen was born in Derby and spent most of his youth around Melbourne, South Derbyshire. After leaving school he went to catering college in Derby before moving down to London to work at The House of Commons. He was Executive Chef for a catering company in Fort Lauderdale where he provided food for the Miami Film Festival. He has worked as a private chef for a celebrity in the South of France, and worked alongside Charlie Trotter, a renowned American chef, assisting with the promotion of a new game fare book. After 15 years running The Rose and Crown as a restaurant, he finally closed the kitchen doors in 2021.

Henrietta Breen has been involved with catering and property management for over twenty-five years. She supported her studies at university by waitressing in local restaurants and has worked in France in hotels and holiday accommodation. She has worked for private functions in England and America including high profile film launches. She is also a primary school teacher and teaches in four local schools.